During the first two months of Almag-02 device trial operation, 10 heads of sports horses with the following pathologies were subject to PEMF treatment:

–          myopathy of the brachiocephalic muscle, caused by congenital malposition of the left forelimb

In order to conduct PEMF sessions on the horse’s muscles, it was mandatory to place a device control unit above the animal in order to ensure the access of magnetic emitters to the affected area and for the safety of the device in general.

All PEMF procedures were carried before the evening feeding. The time selected was due to the fact that the entire training process for the day was completed. 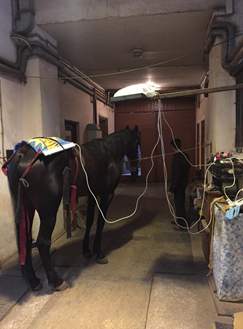 Almag -02 programs No. 50 and 73 were selected for the treatment of horses with the various muscle groups myalgia of different etiologies and for the rehabilitation of animals after heavy physical exertion without any visible pathologies. Program No. 50 was used to treat cereal muscles while program No. 73 targeted the shoulder girdle muscles.

During the program No. 73 treatment, local emitters were held in place of the necessary exposure manually because no other type of safe fixation was found.

For the entire duration of PEMF application (14 days) all horses in the clinical study group were neither subject to any other methods of health maintenance nor received any additional treatment such as rubbing irritating liniment, massage, warming or use of any anti-inflammatory injections.

The horses continued to carry the intense training competitive load and maintained good appetite, which in sports horses is one of the signs of the proper functioning of all body systems. In addition, all animals behaved very calmly throughout the sessions and were significantly relaxed upon procedure completion. Some horses (two out of six) sweated at the parts of the body where the magnetic inductors were directly applied to the skin.

In case of myopathy of the brachiocephalic muscle, the dynamic potencies of the posterolateral muscle group as well as the muscles of the croup region were restricted and the amplitude of contraction of the muscles of the chest limb decreased. Limitation of muscular-articular dynamics lead to the manifestation of lameness of a mixed type. The horse had congenital defects of the exterior. Usually, it makes the process of complete recovery impossible. Due to the constant discomfort in the movement, the stallion during the training was often nervous gaining reins, and did not tolerate presence of another horse. The treatment of such pathology was administration of two programs per session: program No. 50 to treat the croup and program No. 73 to cure the shoulders. The entire course duration lasted for 14 days.

During the procedure, strong sweating was observed in the area of ​​the croup under the inductors of the main emitter in the first two days after which the sweating decreased. The sweating began to appear only after intense training and competition performances. One of the horses with the poor appetite prior to PEMF sessions showed a significant appetite improvement during the PEMF course which lasted for 1.5 weeks after the course completion. In addition, the horse became much calmer in training, the amplitude of limb movement improved and became more even. During the course of Almag-02 treatment, the horse was not given any additional maintenance therapy.

The positive effect in the horse’s condition continued for 2 weeks after the treatment course was completed regardless of the fact that the horse continued to perform in competitions.

In treatment of tendonitis of the superficial digital flexor, the program No. 33 of the Almag-02 device was used in conjunction with the drug treatment. The course of PEMF treatment totaled to 20 sessions. According to the ultrasound results, a significant acceleration of the healing process (about 1.5 times) was noted in comparison to the traditional medication-only method of treatment. 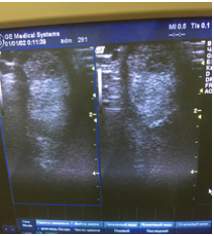 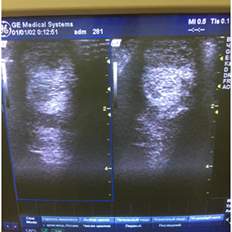 In case of fracture of the putative bone, program No. 32 was used twice in each session for 20 days. The healing rate has not practically changed, but noted the formation of a flat bone callus at the fracture site without significant growth at the place of formation. At the time of PEMF treatment, the fracture was already in the third month of healing. Severe pain and swelling were no longer observed and due to PEMF exposure the animal behaved very calmly.

The crack of the hoof wall due to a direct impact of the hoof during pre-competition training, led to the lameness of the horse, which was noticeable even at a step. The crack blead once the horse moved. Almag-02 program No.68 was selected with a course of 20 sessions and orthopedic forging. After 3 days the horse returned to training; bleeding during movement was no longer observed. The crack narrowed in width and the process of its fusion with the corolla of the hoof began.

Pic 6. Crack in the hoof at a moment of injury

Pic 7. Crack in the hoof after 3 days

Based on the two-month use of the Almag-02 device, the positive therapeutic effect was noted in treatment of various pathologies as well as horse rehabilitation after significant physical exertion, resorption of edema, sedation and stimulation of the motor muscles.

Usually, the positive effect of PEMF treatments occurred with the increase in the number of sessions as it states in the instructions for the device. It should be noted that the use of various warming liniments during the rehabilitation period is also quite effective, but sometimes leads to severe anxiety of animals in response to skin irritation at the place of application of the preparations. During the use of Almag-02 device, no cases of animal discomfort and anxiety were observed, even when sweating was noted at the point of contact of the magnetic inductors.