RHINITIS is a medical term for irritation and inflammation of the mucous membrane inside the nose. Common symptoms of rhinitis are a stuffy nose, runny nose, and post-nasal drip. The most common kind of rhinitis is allergic rhinitis; it’s usually started because of airborne allergens such as pollen, dust and dander.

Rhinitis is very common. In the United States, till 30% of adults are affected annually.

In rhinitis, the inflammation of the mucous membrane is caused by viruses, bacteria, irritants or allergens. The inflammation results in the generation of large amounts of mucus, commonly producing a runny nose, as well as a stuffy nose and post-nasal drip.

Rhinitis is divided into three types: 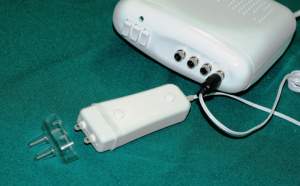 For the treatment of infective rhinitis using devices FEYA (UTL-01) and TEPLON, preheating of the nasal cavity by the dry pre-dosed heating. _MG_0431a

Treatment of vasomotor and allergic rhinitis is conducted by infrared attachment to the instrument TEPLON.

Treatment in detail look at the articles “FEYA” and “TEPLON”.