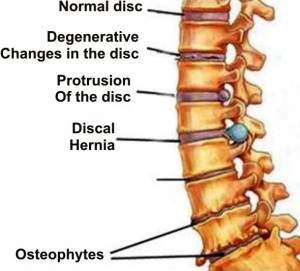 OSTEOCHONDROSIS – is degenerative dystrophic disease characterized by a affection of inter-vertebral disks, osteo-copular structure of spinal column and nervous system. As a result of loss of inter-vertebral disks amortization properties there is pressing and deformation both of a nervous root, the vessel or a spinal cord that invokes pain sensations.

Spinal column consists of 33-34 vertebras, which constitute cervical, thoracic, lumber, sacral and coccygeal parts of spinal cord. Between vertebras are soppy cartilaginous tissues, so called disks, which serve as shock-absorbing padding. Next to each disk there is nervous root from spinal cord to that or another human body. Of the state of spinal cord nerves depends the normal functioning of all human organs and systems. If disk is in good condition (sound), it allows the vertebral segments to move easily, without nerve incarceration. With disks feeding disorder they are worn out, inter-disk pressure increases. With the time the near vertebras become so close to each other that touch and irritate nervous root when move. In the course of time there may appear the formation of intervertebral hernia.

The patients with lumbar affected part suffer from lumber region pain at physical tension, quick inconvenient movement, long tension state or getting cool. The patient also may feel pain in such organs as bowels, sex organs.

If cervical part is affected, not only nerve roots and their arteries are subjects to pressure, but the spinal cord and inter-vertebral arteries. This is revealed itself with neck, shoulder and back of the head pain, which may be spread to arm, shoulder blade and the front area of chest.

Osteochondrosis of thoracic part of spinal cord is revealed itself with spinal column pain, pain syndrome from the side of human internal organs (heart, stomach, lung, liver, kidneys, urinary bladder, and pancreas) and disorder of their function (dyskinesia). Very often osteochondrosis is complicated with neurological complication as a result of nerve ending pressing. At first the patient is prescribed with short-time bed rest within 2-3 days. With pain syndrome subside it is necessary to strengthen back muscle corset with the help of physical exercises. Magneto-therapy with the help of ALMAG-01 device is recommended to be carried out beginning with the first days of disease diagnosing.

To make anti-inflammatory, anti-edema, anesthetizing action. Beside we have: the improvement of nerve endings conduction being pressed between vertebras resulting in recovery of the function of organs to which these nerve endings close come; Traveling pulse magnetic field promotes the improvement of blood flow to the diseased area, increases metabolic activity in adjoin tissues leading both to disk tissue gradual recovery and normalization of its function.