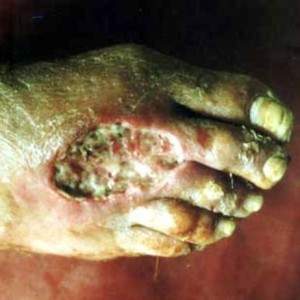 Diabetic antipathy is the vascular complication of prolongedly elapsing uncompensated diabetes mellitus and disturbances of carbohydrate and lipid metabolism associated with it. Pathology is developed in both insulin-dependent and non-insulin-dependent form of diabetes mellitus. The primary localization of lesion is lower extremities. Methods of destruction – from a weakly expressed trophic disorders to trophic ulcers and diabetic foot gangrene, which leads to the amputation of the limb.
ALMAG is used as required part of the complex therapy of angiopathy in the pre-gangrene period. The magnetic field of ALMAG provides an anaesthetizing, anti-spasmodic effect, a beneficial effect on carbohydrate, lipid and protein metabolisms, improves the collateral blood circulation (collateral – this the lateral vessel, which achieves the roundabout blood stream, passing the stopped up vessel). 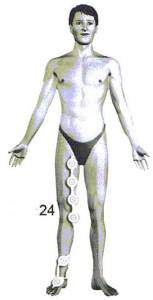 Area of the foot affected by diabetic angiopathy of the vessels is wrapped around by ALMAG starting at the rear of the foot (see Fig. № 24). The first inductor is placed closed to the knee, the last one on the foot itself. This procedure should be performed twice a day.

In case of vascular lesion of the thigh segment, the procedure with ALMAG is carried out once a day with the procedure beginning on the front-inner surface of the thigh, then on the lower leg (shin) (see Fig. 24).

If the Disease has affected vessels throughout the entire length of lower extremity, inductors are placed on the affected area, alternately (see description above), not forgetting about the correct location of the inductors – the first is closer to the torso, the last – to the foot. The most optimal position for the procedure -is while the patient is lying on his back. Sitting position can be used as an option.

During the course of the treatment of diabetic angiopathy, Almag may be fixed on the body with the aid of a finite elastic harnesses, included in the kit so the blood vessels and tissues are not constricted and the blood flow is not interrupted.

Attention! The application of ALMAG is an integral part of a complex therapy of Diabetic Angiopathy, and is conducted by appointment and under supervision of a doctor. During the treatment the control of blood glucose and lipids, as well as the consultation with Endocrinologist – are required! A Doppler scan of lower extremity, vascular and cardiovascular surgery consultation is needed with sudden changed prior to the start of treatment.