in Complex Treatment of Osteochondrosis

The current vertebral pathology burden in most countries reaches the proportions of an epidemic. For instance, among degenerative diseases of the musculoskeletal system, osteochondrosis (OC) of the spine not only takes the lead, but also tends for a steady increase in the number of incidence cases. Its clinical sings appear to be one of the most frequent causes of temporary disablement and often lead to permanent disability. The high expenses associated with the OC disease are also worth mentioning. Another important issue is that of medical rehabilitation of OC patients. Despite the undeniable success already made in this subject area, scientific research and development of new treatment methods for such patients are still in progress.

At present, according to evidence-based healthcare principles, the clinically essential results and outcomes of treatment should be regarded as the main criteria for assessing treatment effectiveness. This was taken as the basis for this study and for the subsequent decision to optimize the treatment process.

The findings of the study are based on the data of a comprehensive examination and case follow-up of 120 patients with neurological manifestations of OC of the lumbar spine. The diagnosis of degenerative disease of the lumbar spine was established on the basis of clinical and neurological examination of the patients, as well as on the basis of data obtained from visual and X-ray diagnostic techniques. The disease duration ranged from 2 months to 31 years, with an average value of 7.88 ± 2.10 years. Among the examined patients suffering from lumbar osteochondrosis, 63 were male (52.5%) and 57 female (47.5%), aged 20 to 63 years, the average age being 42.75 ± 0,50 years. 29 patients (24.17%) had steady-state course of the disease, while 91 (75.83%) of them had chronically relapsing one.

Radicular syndromes (CS) of lumbar osteochondrosis were observed in 49 patients (40.83%). Among these, 41 patients (83.67%) had left-sided disposition of radicular syndrome, and 8 patients (16.33%) had right-sided one. The niveau diagnostics of patients revealed dominance of damage of the fifth lumbar root (36 patients, or 73.47%). Damage of the first sacral root was determined for 4 patients (8.16%), and damage of both the first sacral and the fifth lumbar roots was found in 9 patients (18.37%). All patients were in the sub-acute stage of the disease.

The patients were divided into 2 groups (of 40 people each) depending on the type of the treatment provided: the control group was to receive conventional treatment methods: NSAIDs by ingestion and in topical forms, massage, therapeutic exercise, stretching on “Detensor 18%” therapeutic traction mats with different degrees of hardness, wearing of a back brace (by “Orlett”) with 6 stiffeners; and the treatment group: the patients who received magneto-therapy with “ALMAG-02” device alongside with the standard treatment.

All patients were carefully examined by means of preliminary clinical, laboratory, and radiographic tests. All patients also had MRI. For all of them, osteochondrosis of varying intensity and herniated discs in the lumbar area were detected. Assessment of severity of vertebrogenic pain was performed on the basis of VAS. Severity of vertebral deformities (by means of a vertebral rotameter) and of straight leg raise were assessed. Osteoporosis of the spine, gross spondylosis deformans, ossification of the posterior longitudinal ligament were considered as complications which do not affect the course of treatment.

Results of the study

Below are the change patterns of stretch symptoms at baseline and after a course of complex differentiated treatment in the control group (Fig. 1) and the treatment group (Fig. 2) of patients having radicular and reflex syndromes.

The diagrams give a visual presentation of stretch symptom features for patients of various groups throughout the case follow-up process. Straight leg raise with patients from the control group was 14.39% less pronounced than with those from the treatment group, and after completion of the treatment course the variance between the groups rose to 23.62%.

For purposes of comparative analysis of the values ​​throughout the therapy course in different groups, it is important to note that patients with RadS, after the treatment course end, demonstrated growth of the parameter which characterizes straight leg raise. The largest increase of this parameter can be observed in the treatment group, where, after treatment end, the differences with the control group proved to be consistent, although this parameter value was initially comparable among the groups. Prior to treatment start, straight leg raise ratio did not differ consistently between the groups. After the therapy was provided, this index dropped in all groups, being at the minimum level among the treatment group of patients, and was consistently different from that of the control group for 55.04% respectively.

A similar trend was observed for individuals with RefS, the only difference for them being the actual variation figures. The conducted therapy revealed an increase in the parameter characterizing straight leg raise. The maximum increase in this parameter value was observed in the treatment group, where, after the treatment end, the difference with the control group proved to be statistically significant, amounting to 48.30%, while their baseline values were initially similar. Prior to treatment start, straight leg raise ratio did not differ consistently between the patients with RefS aspects. After the complex therapy was over, this index dropped in the control group and was at the minimum level in it. The difference of the relevant parameter between the treatment and the control groups amounted to 59.54.

Fig. 3. Survey data for the control group patients based on assessment performed before and after treatment. 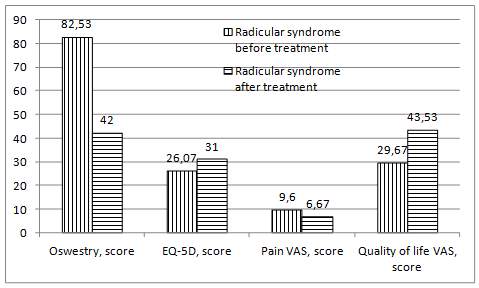 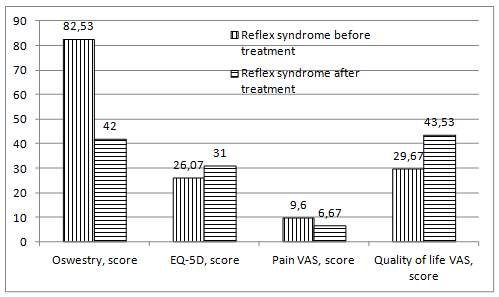 Fig. 4. Survey data for the treatment group of patients before and after treatment. 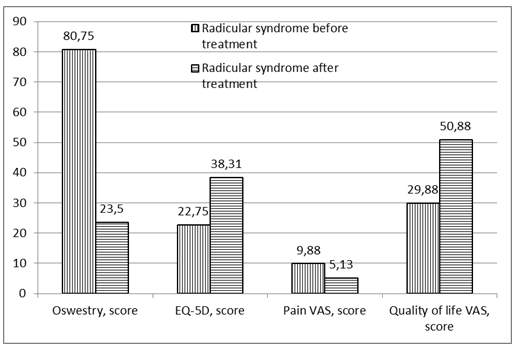 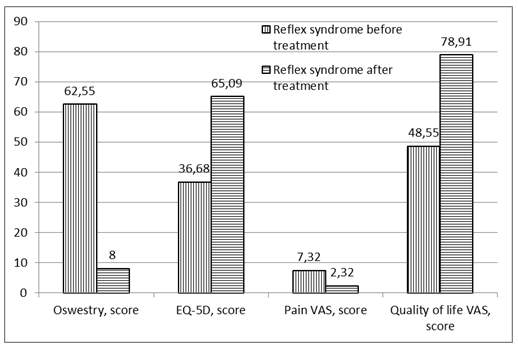 Thus, it is important to note that the assessment of the treatment group’s results after the conducted treatment course, which involved usage of magneto-therapy of certain parameters as part of the therapeutic process, proves the need for and advisability of usage of the developed therapeutic algorithm based on the methodology applied in hospitals and in out-patient care. This is indicative of reliable expediency of the proposed care of patients having reflex and radicular syndromes of lumbar OC, provided that the suggested rehabilitation treatment complex is followed through.

The applied treatment complexes are effective; however, the usage of low-frequency magneto-therapy with “ALMAG-02” device has significantly increased the positive trends of the patients’ condition. Importantly, magneto-therapy was well-tolerated by all patients, and no refusals to participate in the study due to magneto-therapy intolerance were recorded. Magneto-therapy as an effective, safe and up-to-date medical factor can be successfully applied as part of therapeutic complexes for patients suffering from spinal osteochondrosis, both under in-patient and out-patient treatment conditions.